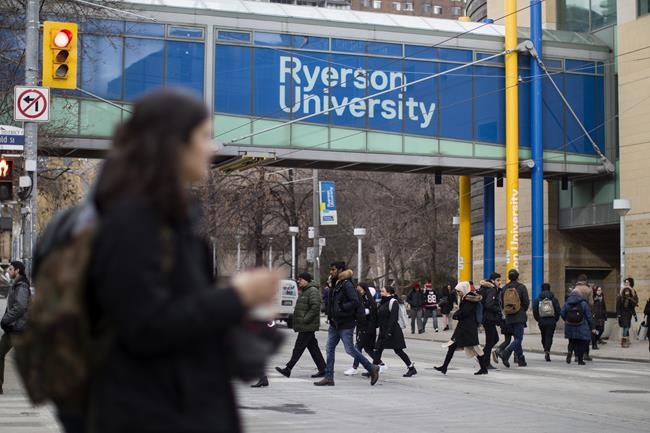 The downtown Toronto university had faced growing calls to change its name – demands that ramped up last summer following the discovery of what are believed to be the remains of Indigenous children in unmarked graves on the grounds of former residential schools.

School president Mohamed Lachemi said Tuesday that he brought the new name to the university's board, which approved it Tuesday afternoon.

"I want to assure everyone that our new name is not about erasing our history," he wrote in a letter to the school community.

"Our values have long defined who we are and they will always guide where we are going. Our values are the basis upon which we have built our uniquely vibrant, diverse and intentionally inclusive culture."

The university's new name reflects that the school is located in the heart of Canada's largest and most diverse city, which makes it a gathering place for people from all over the world, Lachemi said.

"Toronto Metropolitan University reflects all that we are and our commitment to continue being a destination for the great minds, partnerships and discoveries that we are already known for," the school president said.

The renaming process started last fall, when Lachemi tasked a committee with conducting consultations and coming up a shortlist of possible new names.

That committee received responses from approximately 30,000 people between November and December before producing a shortlist of suggested names, the university said.

Lachemi said the university is continuing to challenge the status quo by changing its name.

"Our new name is a cause for celebration, to celebrate all that makes us who we are and to welcome all the ways we can make a positive impact on the people and communities around us -  here in Toronto, across Canada and around the world," he said.

In November 2020, a special task force was formed at the university to analyze and address the legacy of Egerton Ryerson, who helped design both the public and residential school systems in Canada.

It ultimately issued 22 recommendations, including a suggestion to rename the school in a process that "engages with community members and university stakeholders. "

It also suggested sharing materials to recognize the legacy of Egerton Ryerson and providing more opportunities to learn about Indigenous history.

Last August, the school’s board of governors approved a motion to accept all 22 recommendations from the task force.

A statue of Egerton Ryerson on the university’s campus was torn down by angry protesters last summer  in response to the discovery of what are believed to be unmarked graves on the grounds of a former residential school in Kamloops, B.C.

Earlier last year, Indigenous professors at the university asked the school to change its name and remove the statue of Egerton Ryerson from campus because of his role in the creation of the residential school system.

Additionally, Indigenous students in an open letter last May called on their peers, faculty and alumni to stop using the name "Ryerson'' in email signatures, correspondence and on resumes, urging the use of the term "X University.''

The final report from the Truth and Reconciliation Commission detailed widespread mistreatment at Canada's residential schools, including emotional, physical and sexual abuse, and more than 4,000 deaths at the institutions.