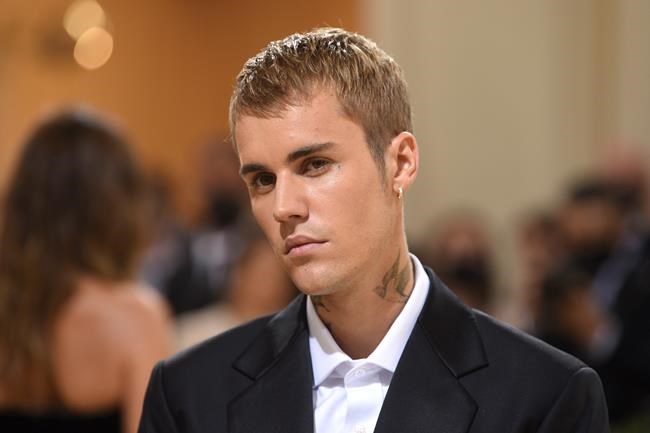 TORONTO — Justin Bieber says he's been diagnosed with Ramsay Hunt syndrome, a virus that has left the right side of his face temporarily paralyzed.

The Stratford, Ont.-raised pop singer took to his Instagram account on Friday to explain the reason behind his sudden cancellation of several concerts this week, including two in Toronto.

Bieber demonstrated in a three-minute video how the virus is affecting one side of his face.

"This eye is not blinking; I can’t smile on this side of my face; this nostril will not move," he said.

"There’s full paralysis in the centre of my face."

He told fans he's frustrated by his recent show cancellations but that he's "physically, obviously, incapable of doing them."

"I hope you guys understand and I'll be using this time to just rest and relax and get back to 100 per cent so I can do what I was born to do," he added.

According to New York's Mount Sinai health system resource, Ramsay Hunt syndrome is a painful rash seen mostly in adults that occurs when the varicella-zoster virus infects a nerve in the head. It is the same virus that causes chickenpox and shingles.

Recovery can take a few weeks or longer if the damage is more severe.

On Tuesday, Bieber postponed two shows at Toronto's Scotiabank Arena hours before he was supposed to take the stage for the first one. He also postponed a date in Washington, D.C., on Friday.

It was the latest setback for Bieber's Toronto dates, which were already delayed twice due to the COVID-19 pandemic.

Bieber has faced a number of health issues in recent years. In early 2020, he went public with a Lyme disease diagnosis, while also saying he'd faced a serious case of chronic mono.

This report by The Canadian Press was first published June 10, 2022.