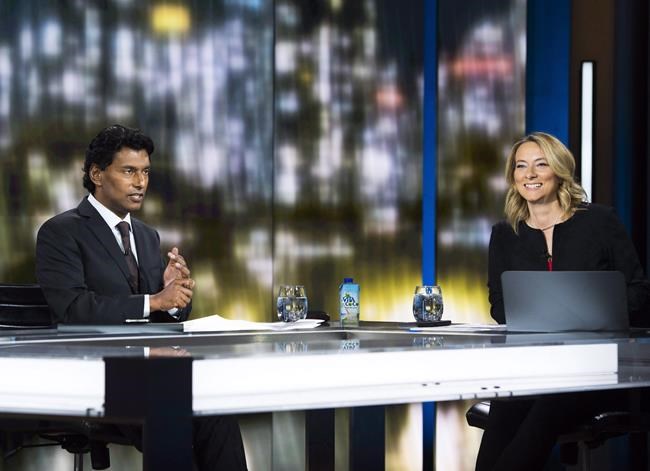 TORONTO — CBC News is shaking up the anchor roles at "The National" as it makes plans to launch a free 24-hour live streaming channel this fall.

The news division of the public broadcaster announced several changes Thursday that it says will help build a new home for local, national and current affairs reporting with commercial breaks.

CBC's flagship news program "The National" will now mainly be helmed by veteran journalist Adrienne Arsenault, who has shared the anchor role in recent years.

Arsenault will sit in the chair from Monday to Thursday, and she’ll also take on the title of chief correspondent of CBC News. Meanwhile, her current co-anchor Andrew Chang will step away from his role on “The National” in August to begin work on an untitled new daily show on the streaming channel.

Beyond that, many specifics are still in development, said CBC News editor-in-chief Brodie Fenlon. The ad-supported channel doesn't yet have a name or an official launch date, for instance, and potential live anchor components will be determined in the coming months.

But he emphasized it will be noticeably different than CBC News Network, the breaking news channel that's available on cable, satellite and through a subscription on CBC Gem.

"I really see it as a companion channel, in a way, but very distinct and different," he said in an interview about the new platform.

"A big chunk of it will be the bundling of journalism that we do across the country that sometimes comes and goes in a newscast ... It's generally longer form. It's more evergreen. And it can live beyond a day."

CBC News Network will remain the exclusive home of news programming such as "Power & Politics" and "Canada Tonight with Ginella Massa," he added.

CBC says it is looking to bolster its digital news platforms in order to “better serve audiences across Canada on both television and digital platforms.”

Chang's departure from the anchor's chair on "The National" will free him up to help shape the new streaming offering, Fenlon said.

"We're going to invest in new programming — Andrew's show is one of them, and we'll have more to announce about the rest," he said.

"That's where we're going to experiment with format and time and learn what the audience is looking for from us."

U.S. streaming operator Pluto TV plans to launch in Canada this fall with a roster of free channels that include an array of film and TV programming as well as live streams of news channels.

Global News has already committed to making feeds from 14 markets across the country available on Pluto, a service it already offers through Amazon’s Prime Video.

For many years, CBC News has operated a free streaming channel of highlights from its recent news programming, available on Roku Channel in Canada and various other platforms globally. The existing channel is an early version of what they foresee the new streaming channel becoming, Fenlon said.

At "The National," Ian Hanomansing will continue to host on Friday and Sunday with his new weekly interview segment set to debut in the fall. He will also become the permanent host of "Cross Country Checkup" on CBC Radio and CBC News Network.

It's not the first time "The National" has faced a shuffling of roles since its splashy relaunch as a four-person anchored program in August 2017, following the retirement of longtime anchor Peter Mansbridge.

When "The National" was first revamped after Mansbridge's exit, the show was presented as a nimble, multiplatform news program with four recognizable journalists who vary in age and background anchoring at various locations across the country.

In early 2020, CBC began making changes to that format in response to feedback from viewers. Arsenault and Chang took the main weeknight hosting duties while Hanomansing moved to Friday and Sunday.

The fourth anchor, Rosemary Barton, took on a new position as the CBC News chief political correspondent. She still hosts the "CBC News: At Issue" panel on Thursdays and continues in her role as host of "Rosemary Barton Live."

This report by The Canadian Press was first published June 30, 2022.