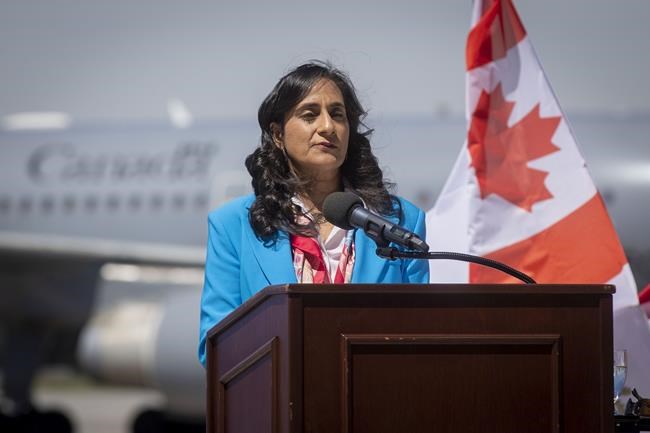 OTTAWA — Canada is sending military trainers to the United Kingdom to help teach Ukrainians how to fight invading Russian forces.

Defence Minister Anita Anand announced the plan on Thursday, saying up to 225 Canadian Armed Forces members will eventually be based in Britain for an initial period of four months.

There they will work alongside counterparts from Britain, the Netherlands and New Zealand in training Ukrainian soldiers on the basics of soldiering.

“Training missions like this, assisting our allies and our partners when they are under attack, is what we do,” Anand said during a virtual news conference. “It is a priority for us as a country to stand shoulder to shoulder with Ukraine and with our allies.”

It also came hours before Ukraine's ambassador to Canada was expected to publicly express her country’s disappointment over Ottawa’s decision to allow pipeline equipment that was in Montreal for repairs to be returned to a Russian energy giant.

The Ukrainian military has put up a spirited defence of its country since thousands of Russian forces launched their assault on Feb. 24. But those early battlefield successes and the ensuing grinding war in the east have not been without a cost.

The Ukrainian government reported in June that 10,000 of its soldiers had been killed since Russian forces invaded, with thousands more wounded and missing.

Officials have also said that between 100 and 200 Ukrainian troops are being killed every day and hundreds more wounded.

Canadian troops had continued working with Ukrainian counterparts even after the previous training mission known as Operation Unifier was suspended, including teaching them how to use the four M777 howitzers that Canada donated earlier this year.

But while those were limited efforts, Thursday's announcement represented a full resumption of Operation Unifier, which also included 225 Canadian trainers.

It also follows British Prime Minister Boris Johnson first proposing in June that his country host a training mission on its soil.

“When we paused our military training and capacity building operations in Ukraine under Operation Unifier in early February, I made a commitment to resume these operations whenever and wherever possible,” Anand said.

“Canada is committed to supporting Ukraine's short-, medium- and long-term defence needs. I am therefore announcing today that we are fulfilling our promise to resume large-scale training under Operation Unifier.”

“I am delighted that the Canadian Armed Forces will be joining the growing international effort to support the training of Ukrainian soldiers in the U.K.," Wallace said in a statement.

"Canada’s expertise will provide a further boost to the program and ensure that the Ukrainian men and women coming to the U.K. to train to defend their country will get a wide pool of experience and skills from both U.K. forces and our international partners.”

The first 90 Canadian troops from CFB Edmonton are scheduled to leave for a military base in the southeastern part of Britain next week, according to Anand.

There they and others will work with Ukrainian counterparts for an initial four-month period, teaching them how to use their weapons as well as first aid, basic tactics and military law.

Canada first launched a mission, along with Britain and the United States, to help train the Ukrainian military after Moscow annexed Crimea in 2014 and started supporting pro-Russian separatists in eastern Ukraine.

The federal government says that mission helped train more than 30,000 Ukrainian soldiers before all Canadian troops were evacuated ahead of Russia's invasion.

In April, Russia sanctioned all six former commanders of Operation Unifier, which some saw as proof of the mission's success.

Anand also announced an agreement between the Canadian government and London, Ont.-based General Dynamics Land Systems for the delivery of 39 brand-new armoured vehicles to Ukrainian forces in the coming weeks.

“These vehicles will be delivered straight off the assembly line to address some of Ukraine's most pressing battlefield needs,” she said. “We are also equipping these vehicles with additional modern state-of-the-art armour and machine-guns.”

Western allies have donated billions of dollars in military weapons and equipment to Ukraine since mid-February, with Canada contributing $662 million in anti-tank and sniper rifles, drones, armoured vehicles, artillery and ammunition.

The donations have sparked some concerns about military equipment ending up on the black market or being used for unintended or illicit purposes.

While Canada is not part of ongoing discussions with Ukraine about the tracking of such equipment, Anand acknowledged the importance of ensuring Canadian-supplied weapons are used for their intended purpose.

Anand said she had discussed the issue with Ukrainian Defence Minister Oleksiy Reznikov in January, “recognizing that it is an important issue for Canada and for Canadians.”

The minister, meanwhile, sidestepped a question about the government’s decision to grant Siemens Energy an exemption from sanctions imposed on Russia to allow the return of a turbine to Russian state-owned energy giant Gazprom.

Kyiv has previously said the move sets a dangerous precedent by undermining sanctions put on Russia, which includes specific measures against Gazprom, in response to its invasion of Ukraine.

Ukrainian Ambassador Yulia Kovaliv was expected to express her country’s disappointment during an appearance Thursday before the House of Commons foreign affairs committee, which is studying the government’s decision.

The turbine is intended for use in the Nord Stream 1 pipeline supplying Germany with natural gas.

Foreign Affairs Minister Mélanie Joly, who defended granting Siemens Energy a sanctions exemption for the turbine, as well as Natural Resources Minister Jonathan Wilkinson were also to appear before the House of Commons foreign affairs committee.

On Wednesday, Joly and German Foreign Minister Annalena Baerbock both insisted the return of the turbines used in the Russian pipeline was necessary.

The Canadian Armed Forces also announced Thursday that eight CF-18 fighter jets have arrived in Romania for a four-month deployment in which they will help NATO guard against foreign incursions into Romanian airspace.

It is the seventh time that Canada has sent fighter jets to Romania as part of NATO's air policing mission since 2014.

This report by The Canadian Press was first published Aug. 4, 2022.