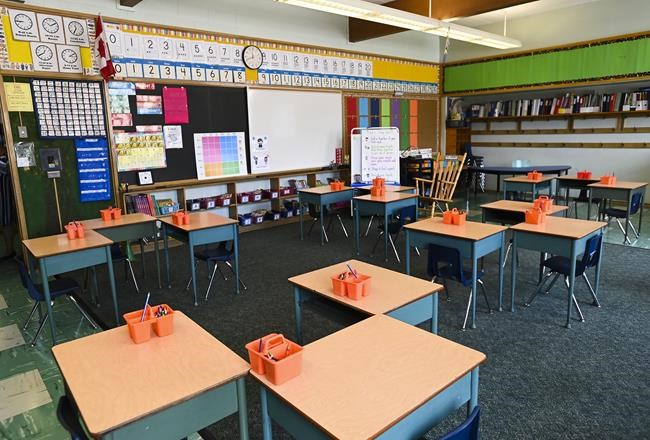 TORONTO — The raises the province is offering education workers in a proposed four-year deal aren't enough to keep up with the cost of living, the union representing public high school teachers said Thursday.

Karen Littlewood, president of the Ontario Secondary Schools Teachers' Federation, weighed in on the proposal the government tabled earlier this week in bargaining with the Canadian Union of Public Employees.

"I think it's unfair," she said. "We in OSSTF, a third of our members are education workers, and they fall in that same kind of earning category."

The proposed deal, which would offer a two per cent raise to education workers making less than $40,000 a year and a 1.25 per cent raise to everyone else, gave a first indication of what the Progressive Conservative government is seeking in deals also being negotiated with the four major teachers' unions.

Littlewood said her union is still in the early stages of bargaining and has yet to receive an offer from the province, but she expects to see a similar proposal.

Offering only a 1.25 per cent increase, after raises were capped at one per cent for several years, is "not respectful for the work that's being done," she said.

"We are having difficulty retaining workers, hiring workers. You're not going to get them this way," Littlewood said.

"It's the same as health care. It's happening there faster than in education, but we have to look at all those warning signs."

In a statement Thursday, Education Minister Stephen Lecce said the government's goal is to deliver a "stable, normal, and more enjoyable school year that children in Ontario desperately need and deserve."

"While we negotiate a four year deal — a longer deal that delivers stability to families and workers, we will continue to prioritize ... ensuring students are back in class, with tutoring and mental health supports," he said.

CUPE has asked the province for annual raises of 11.7 per cent – or $3.25 per hour – arguing workers' wages have been restricted over the last decade and inflation has been high.

A spokeswoman for Lecce said earlier this week that CUPE is also asking for five additional paid days before the start of the school year, 30 minutes of paid preparation time each day, and increasing overtime pay from a multiplier of 1.5 to 2.

If the terms of CUPE's proposal was applied to all education contracts, it would cost taxpayers $21.8 billion over the proposed three years, Caitlin Clark said in a statement.

The previous contracts were subject to legislation known as Bill 124, introduced by the government in 2019, that capped wage increases to one per cent a year for three years for public sector workers.

Deals for the five major education unions expire Aug. 31 and the terms of the first deal struck in a round of bargaining often set the standard for the rest.

Barb Dobrowolski, president of the Ontario English Catholic Teachers' Association, said she believes the government is "trying to reduce expectations" during the bargaining process.

At the same time, negotiations are still in the early stages and it would be premature to draw conclusions about what might be presented, she said, particularly since the OECTA only represents teachers and not other education workers. Salary has not yet been discussed in the union's talks with the province, she added.

She stressed, however, that teachers and workers across the province are feeling the pinch as living costs increase.

The Elementary Teachers’ Federation of Ontario, meanwhile, said the government's conduct during bargaining will be a "good litmus test" for its commitment to public education.

"We expect to see a government that bargains in good faith and shows a demonstrated commitment to public education," ETFO president Karen Brown said Thursday in a speech at the union's annual meeting.

This report by The Canadian Press was first published Aug. 18, 2022.