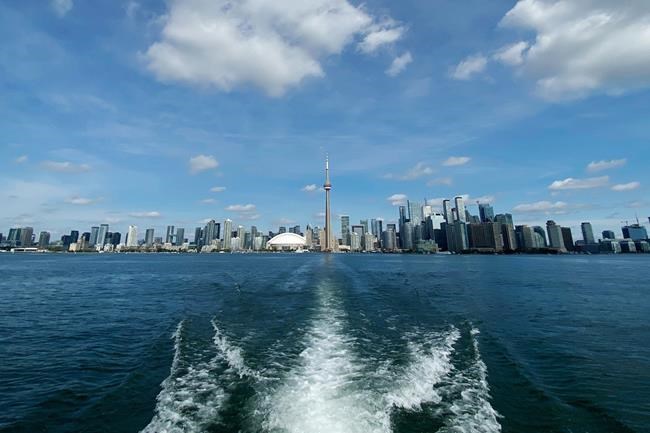 TORONTO — A man who was on board a Toronto ferry that crashed on the weekend says passengers standing on the stairs waiting to disembark fell like a "deck of cards" when the vessel hit the dock.

Mandeep Mashiana, who was standing nearby on the ferry, said the impact was enough to knock everyone off the stairs.

"Everyone who was standing on the stairs or over ahead of me were all on the floor," Mashiana, 35, recalled Monday.

"The force was that big that all the people from the stairs fell like deck of cards... all of them were gone. They were downstairs."

Police say the crash happened at around 5 p.m. on Saturday as the boat approached the terminal with more than 900 people on board.

Twelve people sustained minor injuries and five were taken to hospital for treatment, though none of the injuries were deemed serious.

Mashiana, who was not injured, said he went down to help those who had fallen.

"I tried to pull a young girl out of the way. And at that time, there was a lot of screaming happening," he said. Some people were trying to console their children, he added.

Shortly afterward, ferry staff called out for everyone to stay in place, saying they would get everyone out and get treatment for the injured, he said.

The ferry docked a few minutes later when emergency crews arrived at the terminal, he said. Staff instructed the injured on where to go, he said.

The City of Toronto's parks department said ferry service to Toronto Island will be reduced for the rest of the summer as a result of the crash.

The city said one ferry has been taken out of service and other vessels will be operating at reduced capacity going forward.

"Until further notice, there will be only three ferries operating between Jack Layton Ferry Terminal and Toronto Island — two passenger-only vessels and one vehicle/passenger vessel," the city said in a statement. "Unnecessary vehicular passage is discouraged."

Those who want to cross to the island are warned to brace for longer than usual wait times for the remainder of the summer.

An inspector will need to sign off on the proper safety procedures and measures before full operations can resume, the city said.

Wayne Smith, a professor at the Ted Rogers School of Hospitality and Tourism Management in Toronto, said the crash and the reduced service will likely have a minimal impact on tourism in Toronto and its islands, mainly because the peak summer season is winding down.

"I think it'll be something they'll be able to work around, especially when school starts again ... because you won't have the same demand," he said.

The city should clearly communicate with those who use the ferry service regarding wait times, so people know what to expect, Smith said.

"I think if people can pre-book tickets, and they know what, or how long or what time it's going to be, I think it'll be something they'll be able to work around," he said.

"Really communicate to people: what time the ferry is leaving, what's going on, that type of thing. That's the big key," he said. "People don't mind waiting ... as long as they know."

The cause of the crash has not yet been determined. Police are investigating and the Transportation Safety Board of Canada said it is also sending a team to look into the incident.

This report by The Canadian Press was first published Aug. 22, 2022.