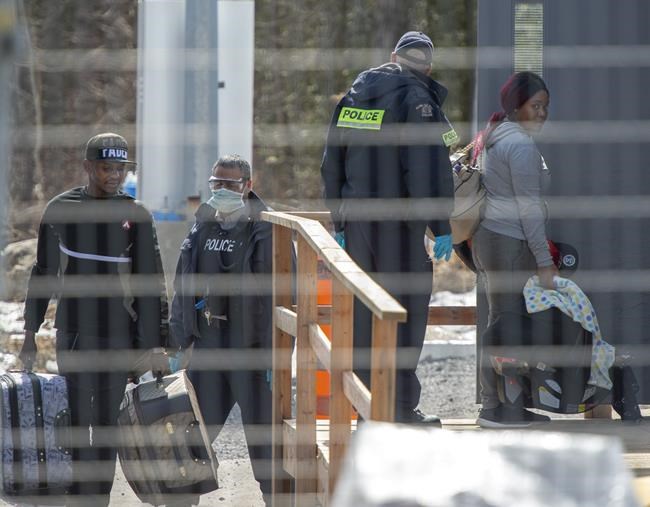 OTTAWA — The Supreme Court of Canada will take time to weigh arguments about the constitutionality of a refugee agreement between Ottawa and Washington after hearing a challenge from claimants and human-rights advocates.

Opponents of the Safe Third Country Agreement argue it "contracts out" Canada's international obligations to refugee claimants to the United States, without proper followup to ensure Washington is doing the job.

They want the top court to declare the legislation underpinning the pact in violation of the Section 7 Charter of Rights and Freedoms guarantees of life, liberty and security of the person.

The federal government has consistently defended the constitutionality of the agreement, under which Canada and the United States recognize each other as havens to seek protection.

Supreme Court judges peppered both sides with questions Thursday about their legal arguments before reserving a decision in the case until a later date.

The binational agreement allows Canada to turn back prospective refugees who show up at land ports of entry along the Canada-U.S. border on the basis they must pursue their claims in the U.S., the country where they first arrived.

"We are not dealing with people who are fleeing from their home countries," federal lawyer Marianne Zoric told the Supreme Court hearing. "They are people that are coming to Canada from a safe third country."

In a written submission to the court, the government argues that returnees have access to fair asylum and detention processes south of the border. "It is not unreasonable to remove claimants to the United States so that they can claim protection in that country."

Canadian refugee advocates have long battled the asylum agreement, contending the U.S. is not always a safe country for people fleeing persecution.

In each case, the applicants, who are citizens of El Salvador, Ethiopia and Syria, arrived at an official Canadian entry point from the U.S. and sought refugee protection.

They argued in court that by returning ineligible refugee claimants to the U.S., Canada exposes them to risks in the form of detention and other rights violations.

Detention and the consequences flowing from it are "inconsistent with the spirit and objective" of the refugee agreement and amount to a violation of the rights guaranteed by Section 7 of the Charter, she wrote.

"The evidence clearly demonstrates that those returned to the U.S. by Canadian officials are detained as a penalty."

McDonald also found evidence of barriers in accessing legal advice and acquiring the necessary documents to establish an asylum claim in the U.S., heightening the risk of people being returned to dangers in their home country.

However, the Federal Court of Appeal overturned the decision last year.

"But because the claimants chose not to attack any administrative conduct, we have neither the ability nor the evidence before us to assess it."

The Court of Appeal also found the legislative regime consistent with the Charter unless the treatment experienced by those sent back to the U.S. could be shown to "shock the conscience."

In their written submission to the Supreme Court, the claimants and advocates say the Appeal Court "declined to engage with the substantive merits of the case" and adopted a "highly restrictive approach to Charter review."

They argue the U.S. immigration detention system has been "widely condemned for its serious violations of international minimum standards" for holding asylum seekers.

"This legislative scheme effectively contracts out Canada's international obligations to refugee claimants based on the premise that the U.S. will fulfil those obligations for us," the submission says.

While Canada is required by law to ensure this premise remains valid through ongoing monitoring of U.S. asylum policies and practices, "it has failed to do so," they argue.

On the contrary, the government says, at the time of the Federal Court hearing, Canadian review of the binational agreement was "efficient, effective and thorough," and the information gathered did not reveal significant problems.

Justice Malcolm Rowe suggested to Andrew Brouwer, a lawyer for the public interest parties, that they were arguing any failure within the U.S. immigration system means Canada can never turn anyone back at the border because it will be contrary to the Charter.

"Isn't that what you're saying to us?"

Brouwer indicated there is evidence that Canada sends refugees into circumstances where they face detention and the risk of persecution.

"What we're saying is that if Canada wants to rely on the United States as a partner for refugee protection, then at a minimum, Canada needs to be able to rely on the U.S. upholding its obligations to ensure effective protection to those that we hand over to the U.S."

This report by The Canadian Press was first published Oct. 6, 2022.