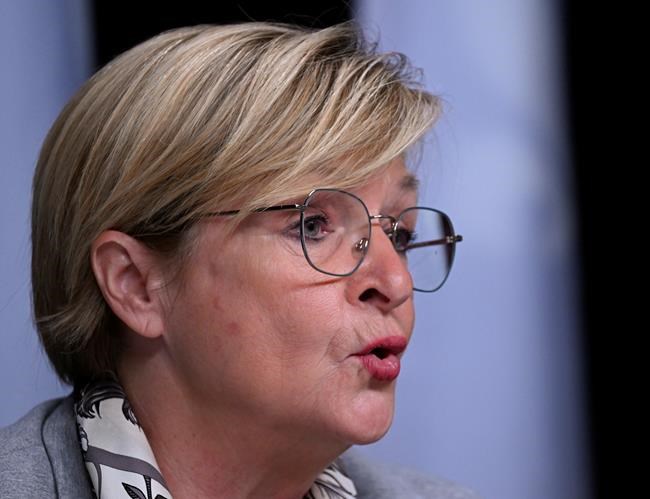 QUEBEC — The province's Education Department was ill-prepared when the COVID-19 pandemic forced schools to shutter in March 2020, and it still does not have a complete picture of the learning delays that resulted, Quebec's auditor general said Wednesday.

"The studies available to the Education Department do not allow it to have a complete portrait of learning delays in order to put in place the appropriate remedial measures," auditor general Guylaine Leclerc said, raising concerns that some students could end up dropping out as a result.

Alain Fortin, who oversaw the education audit, said it's important to know which students are struggling and where remedial efforts are needed.

"We're not saying at all that it's irreversible," Fortin said during a news conference in Quebec City. What is needed, he added, is a full portrait "to know where the delay is, then to put in place the measures."

But that data has proven hard to obtain. Education Minister Bernard Drainville said officials are still trying to measure the situation for students.

"In some cases, we don't have the data. They are with the school service centres," Drainville said, referring to Quebec's equivalent of school boards.

The auditor general's report was also critical of $88 million invested in tutoring without having any data to support who needed what. "Having known that, they would maybe have been able to spend that $80 million in a proper way," Leclerc said. Drainville defended the tutoring plan as a measure designed to help some children who fell behind and to give teachers some respite.

The report also found the province was slow to give school service centres guidance on the minimum educational services to be offered in the spring of 2020, which led to widely different offerings depending on the school district.

Schools shuttered on March 13 and reopened at different times in different regions. Minimum service directives were only established in time for the return of classes in September.

As an example, Leclerc said that in May and June 2020, some high schools offered courses while others didn't. She couldn't draw any conclusions on the quality of education received.

Many service centres also did not have the necessary computers to pivot to online education, and for some that situation persisted 18 months into the pandemic.

Leclerc was also critical of the department's purchase of $42 million in video-conferencing equipment that remains largely unused.

One of Quebec's major education unions said it was not surprised by the report, noting many of the shortcomings could have been avoided by consulting its members, including money spent on unnecessary equipment and undefined tutoring. A bigger issue is not measuring student learning difficulties.

"This delay will now be difficult to measure and serious actions will have to be taken to remedy it and avoid possible dropouts," Eric Gingras, president of the Centrale des syndicats du Québec, said in a statement.

Liberal education critic Marwah Rizqy called the auditor's findings "awful" and said there is no excuse for the Education Department's lack of data. "How many children have slipped through the cracks because of the pandemic?" she asked.