Does the NDP know their plan would let the highest income parents pay the least for childcare? 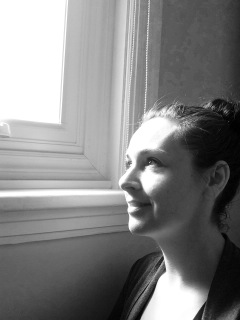 Yesterday’s announcement from the NDP is a good reminder that designing good public policy is hard work. I have a much easier job, watching and critiquing from the nosebleed seats.

The NDP has promised Canadians a new national childcare program that would offer conditional transfers to provinces that agree to create new childcare spaces where the fees paid by parents would be no more than $15 per day.   Mulcair has also promised to leave the Universal Child Care Benefit, a flat cash payout to parents that the Prime Minister has just promised to expand.  It wasn’t clear whether the NDP plan would change the Child Care Expenses Deduction, but a senior staffer helpfully tweeted last night that the deduction would also stay put.

One straightforward concern, raised by Stephen Gordon on Twitter last night: Why should a high income family that can afford more get a $15 childcare spot?  Wouldn’t targeted programming be better?  It’s a good question and one that needs an answer.  I have an additional concern:  The net effect of a new $15-per-day plan that leaves the UCCB and Child Care Expenses Deduction untouched looks like it would let very high income parents pay the least for childcare.  More on this shortly.

The Liberals put out their own news release that bemoaned the loss of the childcare plan they had launched in 2005, after lengthy federal-provincial negotiations.  That plan had something going for it.  For starters, it existed, which is usually preferable to hypothetical programs. For another, it didn’t bind provinces to capped fees and it was flexible enough to include the morning preschools and drop-in playgroups that are used by stay-at-home parents – even if these aren’t always called childcare.

But then the Liberals lost their cool and ended their release with a claim that the lost decade on a national childcare plan had meant that “an entire generation of children was raised without access to high-quality, universal childcare.”. Unless you believe the word “universal” can do all the work in that sentence, it sounds a bit like the LPC was criticizing childcare choices made by Canadian parents in the last decade.  I don’t think they meant to say that, but it could sure sound that way to people like me who have been raising young kids and sending them to childcare programs in the last 10 years that I thought were pretty good.

I expect the Conservatives, when they get around to it, will come out with something echoing their 2005 mantra about ‘choice’ and ‘valuing all families’.  Who can forget Rona Ambrose arguing that “old white guys” in Ottawa should not be “telling us [parents] what to do” as a reason to replace federal-provincial childcare agreements with $100 monthly cheques to parents.

Yes, childcare policy sure is easier when you feel your only job is to cut uniform cheques to parents.  You don’t have to worry about need, or supply, or costs or impacts.  But, as Tammy Schirle has pointed out, here and here, the UCCB sends gobs of money to parents who don’t need it and has the weird effect, for a childcare policy, of encouraging women to work less.

For low-income parents, municipalities do their best to deliver targeted subsidies – though the UCCB gets unhelpfully included in those income-tests.  Middle and higher income full-fee parents get more value out of the federal Child Care Expenses Tax Deduction.  That deduction lets one parent (the one with the lower income), deduct up to $7,000 per child in childcare fees from their income, before taxes, meaning it’s worth more as your taxable income goes up. As an aside, it’s been frozen like a popsicle at $7,000 for 15 years now.

There are a lot of moving parts to the way we fund childcare in this country and the way the parts interact is really important.

Which brings me back to the NDP plan.  By leaving in place the existing UCCB and childcare deduction, a universal $15 per day plan could let the highest income parents pay the least for childcare.  Let me explain.

Let’s imagine two parents, both women with full-time jobs who receive the same UCCB payment and claim the tax deduction for their childcare fees.  Let’s let Jill have an income of $40,000 and let’s give Emma an income of $140,000.

The $1,200 in UCCB they each get is taxed at 15% for Jill and 29% for Emma, leaving Jill with $1,020 and Emma with $852.  Both women use that money to buy childcare at $15 a day.  This leaves both women with some number of workdays they would cover out-of-pocket at a heavily subsidized rate of $15 per day.  For Jill that’s 192 workdays, costing her $2,880.  For Emma, that’s 203 workdays, costing her $3,048.  Superficially, it looks like the moving parts in the system are giving Jill a slightly better deal, although the margin between her and Emma with $100,000 more in income is questionably small.  Also, I’d point out this plan asks Jill to pay 7% of her income on childcare while Emma pays only 2% of hers.

Economists have already asked why we should pay billions for programs that give the same benefits to wealthy bankers’ wives as modest-income parents. I’d also like to know why we should pay billions for a new alignment of programs that looks like it’ll let the highest income earners pay the least.  On the upside, at least we’re talking about childcare again. 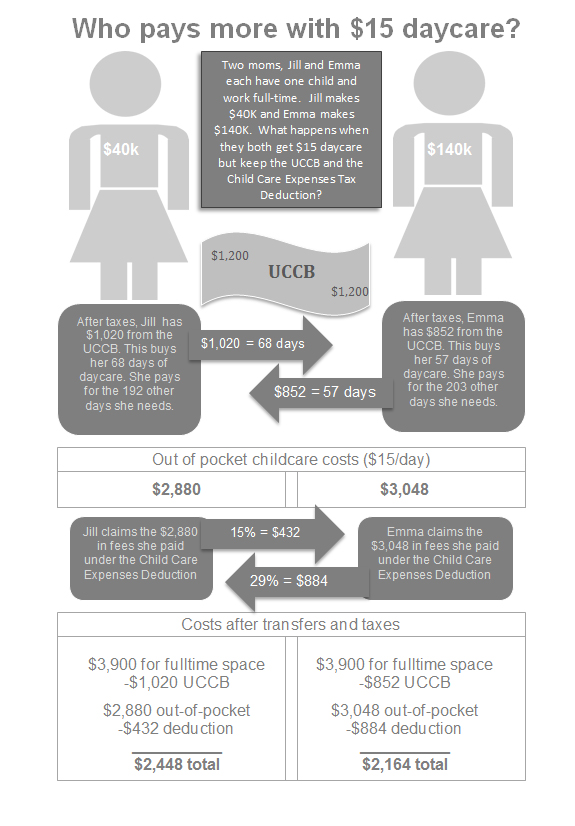 Jennifer Robson is an Assistant Professor at Carleton University where she teaches courses in public policy and political management. She and her partner have three children. Follow her on Twitter @jenniferrobson8