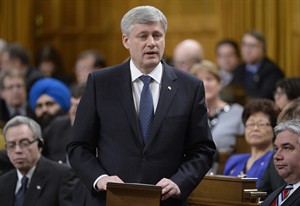 Prime Minister Harper introduces a motion in the House of Commons on Tuesday, March 24, 2015 to expand and extend Canada's war against the Islamic State of Iraq and the Levant. THE CANADIAN PRESS/Adrian Wyld

OTTAWA - The plan to expand Canada's war against the Islamic State into Syria hinges on the conviction that dictator Bashar Assad has lost control of the country, allowing extremists to pose a clear and direct threat to the international community, Stephen Harper said Tuesday.

Although the question opposition parties were asking Tuesday was: What changed the prime minister's mind?

When Canada's combat mission first got underway almost six months ago, Harper ruled out the possibility of CF-18s attacking targets in Syria, which has been home to a bloody four-year long civil war.

The military would have had to seek the permission of the Assad government, he said at the time. But that all changed Tuesday with the introduction of a proposed mission renewal, to be debated later this week, that would expand airstrikes into Syria and extend the mission by a year.

"As our allies have indicated, they are taking necessary and proportionate military action in Syria on the basis that the government of Syria is unwilling or unable to prevent ISIL from staging operations and conducting attacks there, including ultimately attacks that include this country as a target," Harper said.

"That is the legal basis on which we are proceeding. The practical basis is we are determined to do whatever we can to degrade ISIL and to eliminate the threat it poses to this country, and Canadians support us doing that."

It is also a case of military necessity to deny extremists safe haven, he added. The U.S., Jordan and United Arab Emirates have been dropping bombs there and have met with "some success" in those operations.

"We think the mission is important," Harper said. "For the very fact that this mission is so important to the security of this country, we intend to fully contribute."

The effect of adding Syria to the target list has been to further unite political opposition at home — notably the Liberals, some of whom were uncomfortable with the decision to oppose the initial deployment in the face of blatant ISIL atrocities.

Some in the party who initially lambasted Liberal Leader Justin Trudeau for voting against the initial deployment now find themselves opposed to broadening the mission into the murky, vicious conflict involving Assad.

Lloyd Axworthy, a former foreign affairs minister, said Trudeau is right to reject Canadian involvement in airstrikes in Syria, which he said would have the effect of propping up that country's brutal dictator.

"If the basic premise is you are using military action to stop extreme killing, then why the hell are we not doing something about Assad because he's out there killing people every day with his barrel bombs and beheading people?" Axworthy said in an interview.

"He's as much an extremist — although he carries the title 'president' — as anybody in (ISIL)."

Even without Syria added to the mix, Axworthy said the six-month bombing campaign in Iraq should now be followed up with a more long-term plan to restore stability to the country.

"You just can't walk away and say, 'Well, we've done our bombing, now it's over, goodbye.'"

The Liberals said Tuesday that, should they emerge victorious from this fall's federal election, they would change the focus of Canada's mission in the region to training and humanitarian assistance.

NDP Leader Tom Mulcair, whose party has long said it would oppose the motion, accused the government of "openly considering an alliance of sorts" with Assad by expanding the mission into Syria.

"It is hard to believe the prime minister when he says that the mission is about preventing atrocities when he is willing to work with one of the worst perpetrators of atrocities in the world today."

Government officials say that can be accomplished without adding extra aircraft or personnel. Defence Minister Jason Kenney has already ruled out increasing the size of the special forces contingent that's already in Iraq — a commitment that the government insists is non-combat.

The threat posed by the Islamic State is self-evident, Harper said during his statement in the House of Commons.

"Canadians did not invent the threat of jihadi terrorism, and we certainly did not invite it," he said. "Nor, as this global threat becomes ever more serious, can we protect our country or our communities by choosing to ignore it."

—With files from Joan Bryden and Stephanie Levitz