Military commanders drawing up new options after victory over ISIL 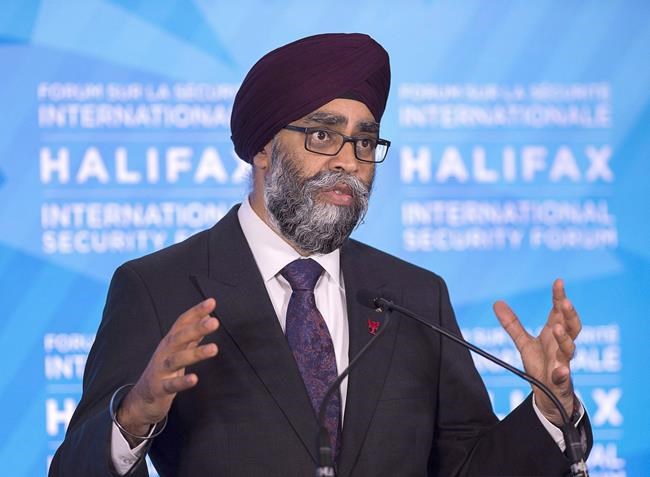 OTTAWA — Military commanders are re-assessing Canada's future role in Iraq as declarations of victory over the Islamic State of Iraq and the Levant have been met with new rifts and tensions across the war-ravaged country.

Iraqi Prime Minister Haider al-Abadi announced earlier this month that the country had been "fully liberated" from ISIL after the militant group, also known as Daesh, was cleared from the last pockets of territory that it had held in the country.

The proclamation capped three years of often intense fighting that first started when ISIL captured large swaths of Iraq and Syria in 2014 and declared the creation of a self-styled caliphate.

Defence Minister Harjit Sajjan told reporters following a visit to the Middle East this week that victory came faster than Canada and its allies had expected, and the focus now is on ensuring stability in Iraq after ISIL.

The military will present options to the government in the new year, though it seems evident that Canadian forces will be training Iraqi counterparts to protect against various threats from inside and outside the country.

Sajjan did not give any indication that the government was planning to end Canada's military mission in Iraq, which was extended this past summer to March 2019.

"The progress against Daesh has gone actually quite well, to the point where we are actually ahead of schedule based on our plan," he said by telephone from London, where he was meeting with his British counterpart.

"As you know, we've taken 100 per cent of the territory but a lot more work needs to be done to make sure that stability within the nation remains and the capacity building needs to start."

But despite ISIL's defeat on the battlefield, peace and stability remain fleeting in many parts of Iraq as long-standing divisions and tensions have started to re-emerge and even erupt into violence.

The most recent incident has seen three days of deadly protests in Iraq's Kurdistan region, where the main Kurdish political parties have turned on each other amid allegations of corruption.

The Kurds have also been at odds with the central government in Baghdad after holding a non-binding referendum on independence in September, which set off a series of limited skirmishes.

The federal government, which had largely ignored warnings of such a development for years, responded by ordering Canadian forces in Iraq to suspend all assistance to their Iraqi and Kurdish allies.

That order remains in effect.

There have also been complaints about the slow pace of reconstruction in Iraq, particularly in Sunni-dominated areas, and concerns about Iran's growing influence with the Shia-controlled government in Baghdad.

The government is also looking at what additional aid efforts are needed to rebuild the country, Sajjan said, and bring its various ethnic and religious factions back together.

"We're committed to making sure that … we can continue the great work that has begun with the military but also making sure that the rehabilitation piece is there, that political stability also remains," he said.