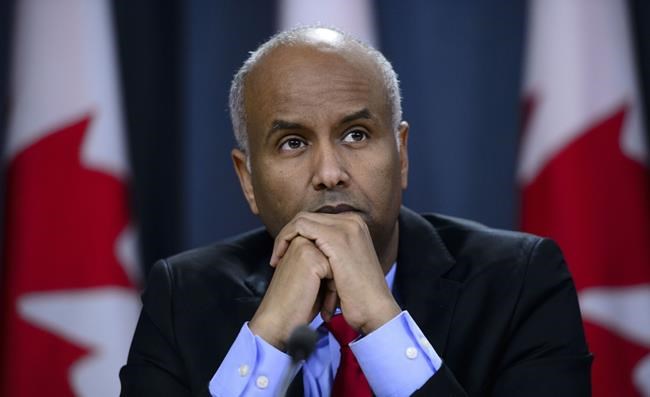 Sixty-three per cent of respondents to a recent Leger poll said the government should prioritize limiting immigration levels because the country might be reaching a limit in its ability to integrate them.

Just 37 per cent said the priority should be on growing immigration to meet the demands of Canada's expanding economy.

Hussen says he is concerned by this because he has heard directly from employers across the country who are in desperate need of workers. Economists and experts widely agree that immigration is key to meeting labour and population shortages.

Canadians may be worried about the ability of communities to absorb more newcomers due to housing and other infrastructure shortages, but Hussen says the answer is not to cut the number of immigrants coming to Canada.

"I think the answer is to continue on an ambitious program to invest in infrastructure, to invest in housing, to invest in transit, so that everyone can benefit from those investments and that we can then use those community services to integrate newcomers, which will also benefit Canadians."

The poll of 1,528 Canadians were randomly recruited from Leger's online panel conducted from June 7 to 10 for The Canadian Press. Polling experts say online surveys cannot be assigned a margin of error because they do not generate a random sample of the population.

On the flip side, 59 per cent of Liberals said they prefer government increasing the number of immigrants, as did 56 per cent of NDP respondents and 43 per cent of Green supporters. Only 19 per cent of Conservatives favoured this option.

The numbers are not the first to suggest a hardening of public opinion against immigration in Canada.

A Leger poll in February had almost half of respondents saying they believe Canada welcomes too many immigrants and refugees. And an EKOS poll released last month suggested 42 per cent of Canadians believe the country accepts too many non-white newcomers.

The data, which was obtained by The Canadian Press through access-to-information law, suggested a majority of Canadians at that time supported the migration levels, but there was also polling data that suggested this support dropped when Canadians were informed of how many immigrants actually arrive every year.

If the government wants to do more on immigration, managing public attitudes and paying close attention to the performance of settlement services would be key, the internal briefing note states.

"Other circumstances can also colour attitudes to immigration: hardening attitudes toward immigration in other countries; feelings of disenfranchisement flowing from economic downturns and globalization," the document says.

"Engagement with the Canadian public is necessary, however any high profile debate will need to be carefully managed."

Hussen said his department has been focused on sharing positive stories of newcomers giving back to their communities as a way to keep public attitudes from turning against new Canadians and refugees.

He added that this has become increasingly necessary to counter what he called fear-mongering and misinformation being spread about immigrants by Conservative Leader Andrew Scheer.

"We used to have a political consensus on immigration, but what worries me is looking at the other side and seeing the leader of the official Opposition taking a stance that is rooted in misinformation and conspiracy theories...basically spreading myths about immigration," Hussen said.

"It's unbecoming of a leader to do that and has a corrosive effect on our social fabric."

But Scheer says it's Prime Minister Justin Trudeau's fault that public support for immigration is waning. He pointed to the influx of over 43,000 asylum seekers that have crossed into Canada "illegally" since 2017 using a forest path in Quebec and avoiding official border checkpoints where they'd have been turned back to the U.S. asylum system.

"There is absolutely nothing fair or compassionate about real victims of persecution having to fight the government to be reunited with their families, or forcing the oppressed to wait longer for Canada's help while others jump the queue, exploit loopholes and cross the border illegally from places like upstate New York," Scheer said in a statement Sunday.

He called Hussen's comments about him an attempt to blame the Opposition for "exposing Trudeau's track record" and vowed to restore fairness and order to Canada's immigration system.