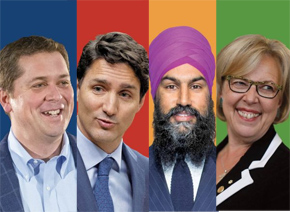 Nanos Party Power Index – The Nanos Index which is a composite of a series of measures including ballot and leadership impressions has the Conservatives 50.9 points, followed by the Liberals with 50.1 points, the NDP 42.3 points, the Greens 40.8 points, the People’s Party 26.7 points and the BQ 33.9 points (QC only).