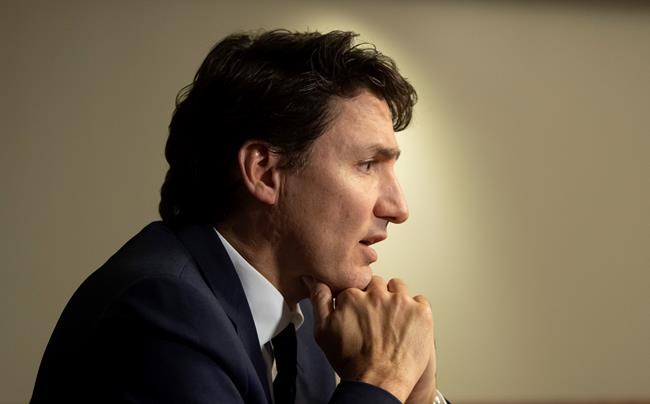 OTTAWA — Prime Minister Justin Trudeau says he's unconvinced that decriminalizing hard drugs is a "panacea" to the country's ongoing opioids crisis, and other options need a chance before considering such a major policy shift.

But Trudeau once felt the same way about marijuana — conceding it during an interview this week — before changing his mind.

During the wide-ranging interview with The Canadian Press, Trudeau said the epidemic requires a complex set of answers and not simply decriminalizing opioids to undercut a tainted black-market supply, as some jurisdictions have suggested.

The prime minister said his government plans to focus on solutions such as giving doctors more authority to prescribe alternatives to street drugs and creating more supervised consumption sites across the country.

However, opening supervised sites is more difficult in places where people are leery of supplying sterile drug paraphernalia and workers who can respond quickly to overdoses, he said, particularly in provinces headed by "capital-C conservative" governments.

The most recent figures from the Public Health Agency of Canada showed that nearly 14,000 Canadians have been killed by opioids since 2016.

Nearly all of those deaths are due to accidental overdoses. The composition of street drugs is practically impossible for users to tell, and the advent of powdered fentanyl — a super-potent opioid, easily hidden and transported, and often cut and then passed off as a less powerful drug — has been a major factor.

Besides the thousands who have died, thousands more have been hospitalized or treated by paramedics. Some have suffered permanent harm.

Trudeau said possible government responses "haven't yet been fully deployed." They will make a difference without having to "immediately jump to the biggest, perhaps biggest, lever in our arsenal," he said, in reference to decriminalization.

Though he didn't rule out that something could change his mind.

Pushed for clarity, Trudeau said, "It is not something that I would be convinced is — or even could be — the panacea." Other moves are "more likely to have a quicker and more significant impact in the coming years."

The Liberal platform included a promise to fund more in-patient rehab beds, expand supervised-consumption sites' effectiveness by extending their hours, for instance, and allow first-time, non-violent offenders to go to drug-treatment courts when charged with simple possession of banned drugs.

The provincial courts, which are already funded by the federal government, allow people to get help for addictions as an alternative to being jailed.

But Trudeau has heard calls to work on safer opioid supplies. British Columbia's provincial health officer made a request on Ottawa earlier this year and more recently Vancouver Mayor Kennedy Stewart made the pitch directly to the prime minister. Vancouver is asking Health Canada for $6 million for the safe distribution of the painkiller diamorphine, better known as heroin.

Conservative health critic Marilyn Gladu said the Liberals need to a have a full plan to address the epidemic, starting with prevention and ending with recovery. She cited mental-health supports, mandatory education in schools, pushing other countries like China to crack down on illegal drugs smuggled into Canada from abroad, and reducing the quantity of opioids prescribed in Canada.

Trudeau said any approach on hard drugs had to be different from that on marijuana.

Just over a year ago, the Liberals legalized the recreational use of cannabis, hoping to take a bite out of the illegal market for the drug and limit, to the extent possible, the ability of young Canadians to get their hands on marijuana.

More than a year later, and just as his government sets rules around cannabis edibles, Trudeau said many of the worries about the high-profile 2015 campaign promise didn't materialize. Federal officials are keeping an eye on the new regime, he said.

"I'm not going to say that it has been without its challenges and there isn't reason to continue to be very alert to it, but I think we can recognize that there was a level of rhetoric that was perhaps, in hindsight, unjustified."

This report by The Canadian Press was first published Dec. 19, 2019.