U.S. vaccine rollout vastly outpacing Canada’s: what can we learn from American push? 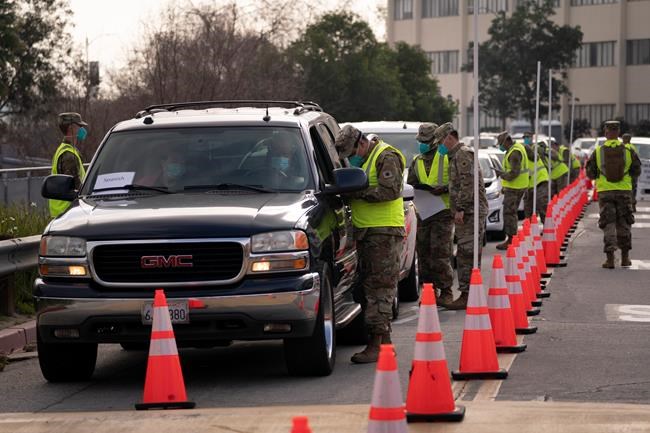 Canadians perusing social media may be coming across photos of their American peers bearing wide smiles and vaccination cards that show they've been inoculated against COVID-19.

A recent ramping up of the United States's vaccine rollout has it vastly outpacing its northern neighbour, and some Canadians are wondering why distribution here is lagging so far behind.

Dr. Krutika Kuppalli, an infectious disease doctor in South Carolina, says that while the speed of the American rollout has been impressive lately, it's not been without its faults.

Communication between states has been mostly lacking, she says, and the absence of a uniform standard for vaccine eligibility has led to inconsistencies across jurisdictions. Some states, for example, include teachers high on their priority list while others are still working on inoculating those 80 years and older.

Confusion in the early stages of the rollout caused frustration and dampened trust, she added. And while the shift to a new presidential administration last month has led to some improvements, Kuppalli says there's room for more.

"I don't think we're the model of success," she said in a phone interview. "We've had a lot of challenges. ... but it's getting better.

"Communication is better, there's definitely greater transparency, and states have been very forthcoming in ramping up vaccine measures and rolling out mass vaccination sites. So all that's helping."

The U.S. was vaccinating an average of 1.7 million Americans per day this week, and had administered at least one dose to more than 12 per cent of its population as of Friday.

Canada, which recently dealt with weeks of shipping delays and disruptions from Pfizer-BioNTech and Moderna, has doled out nearly 1.4 million doses since its rollout began mid-December, covering about 2.65 per cent of its population with at least one dose.

Prime Minister Justin Trudeau said Friday vaccine delivery is set to rapidly increase, however, with provinces preparing to roll out almost a million and a half doses over the next three weeks.

The Americans have many factors in their favour when speeding up vaccine distribution, experts say, including a much more expansive supply than Canada's that's bolstered by production from U.S.-based Moderna.

While having supply is the first step, Kuppalli says getting those vaccines into pharmacies, where they can be easily administered, has also helped. The American government announced weeks ago its aim to supply vaccines to about 40,000 drugstores in the coming months.

Canada has not yet reached the pharmacy stage of its vaccine rollout, but Dr. Isaac Bogoch, an infectious disease expert with the University of Toronto, expects that to happen once we have enough supply to branch out.

"We have the exact same plan, we just need the critical mass of vaccines," said Bogoch, who's also on Ontario's vaccine distribution task force. "When we get that, you're gonna see from coast to coast vaccines offered at many different settings."

While pharmacy distribution makes sense for a quick rollout, it also can lead to problems with wasted doses if people aren't showing up for their appointments, says Kelly Grindrod, a professor at the University of Waterloo's School of Pharmacy.

Pfizer-BioNTech and Moderna vaccines need to used within a relatively short timeframe after they're thawed from ultra-cold storage temperatures, Grindrod says, and once a vial has been punctured, that interval decreases further.

She says Canada has been learning from wastage setbacks other countries are experiencing, and she expects Plan B lists to be compiled of individuals who can quickly fill in when no-shows arise.

Those lists have to be made fairly though, she cautions.

"You have to make sure there's no queue-jumping. So it's not your friend coming in, it's actually people who would fall normally on the next round of priority."

Grindrod says queue-jumping — where people with lower risk of contracting the virus or experiencing a bad COVID outcome are vaccinated before higher-priority groups — has been more culturally unacceptable in Canada than it has in the U.S., a country without a universal health-care system.

So there's some justifiable outrage, she adds, when Canadians see American friends boasting about getting their jabs, especially if they're not in high-risk populations.

"Equity is probably the most important principle of the Canadian vaccine rollout," Grindrod said. "And I'm not sure that's the case in the U.S."

While the American rollout has had its faults, Grindrod admires some of the more unique approaches happening south of the border to ensure high-risk groups can get their doses.

She noted the recent role Black churches have played in co-ordinating inoculation drives among typically underserved neighbourhoods, and the pharmacists who have been driving vaccines into remote communities to inoculate those who can't easily get to an immunization centre.

"You're seeing really positive examples where communities themselves are helping to create effective outreach," she said.

"So I think those are the real lessons we can learn from the U.S."

This report by The Canadian Press was first published Feb. 21, 2021