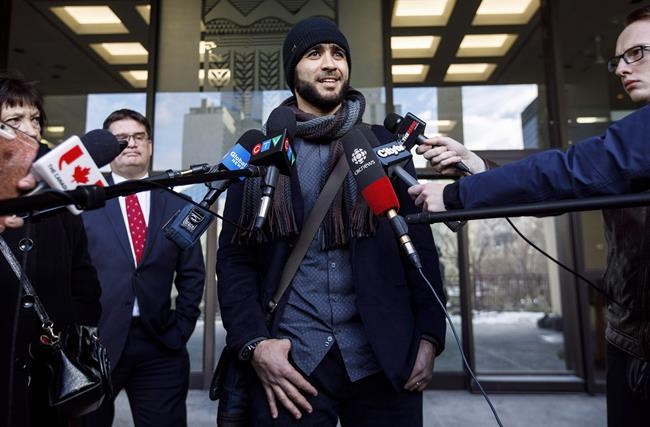 TORONTO — Relatives of a slain American soldier have won a skirmish in their attempt to collect on a US$134-million wrongful-death award against former Guantanamo Bay detainee Omar Khadr.

In a pre-trial decision this week, an Ontario Superior Court ordered Khadr to answer several questions from the plaintiffs about a 50-point agreed statement of facts he signed as part of his guilty plea to five war crimes before a widely disparaged military commission in 2010.

Khadr, 33, has since disavowed the confession he says was the product of abuse. The plea deal, he argues, was his only way to be returned to Canada from the infamous American prison in Cuba.

"The plaintiffs are entitled to know which specific factual statements Mr. Khadr alleges are untrue," Linda Abrams, a court case management master, said in her decision. "To go through the statement of fact, fact-by-fact, according Mr. Khadr an opportunity to agree or disagree with specific factual statements, is not tantamount to using discovery as 'an instrument of torture.'"

A judge in Utah in 2015 made the hefty award in favour of the family of a Sgt. Christopher Speer, a U.S. special forces soldier Khadr was accused of killing in battle as a 15-year-old in Afghanistan in 2002, and Sgt. Layne Morris, another American soldier blinded in one eye by shrapnel.

Khadr, who was in prison in Canada at the time of the default judgment, offered no defence to the lawsuit. He maintains his failure to respond was because he had been denied "natural justice." He says he would not have been allowed to enter the United States and that he simply had no money to hire a lawyer to defend him in Utah.

In her decision, Abrams said Khadr will have to answer several questions about his non-defence, including whether he tried to find a lawyer and if he was in fact broke.

The plaintiffs "are entitled to test his plea of total impecuniosity which, here, he has used as a shield," the master said.

The plaintiffs should also be able to test his claim that he had no way to appear before the Utah court, either in person or via a lawyer, and how he came to be of that view, Abrams said. Khadr had conceded he had lawyers in Canada and the U.S. working for him, she noted.

The decision can be appealed but Khadr's Edmonton-based lawyer Nate Whitling had no comment on Wednesday. Jamie Schacter, co-counsel for the Utah plaintiffs, praised the ruling.

"We are looking forward to having Mr. Khadr complete his examination for discovery and answer our questions," Schacter said in an email. "We continue to move ahead and believe we have taken another step toward having our court enforce the Utah judgment."

Essentially, the plaintiffs argue Khadr can't avoid the Utah civil judgment by recanting his Guantanamo confession and guilty plea. They argue Canadian courts are bound to accept the stipulation of fact and enforce the award.

For his part, Khadr's main defence is that it would be contrary to Canadian public policy and an affront to the concept of justice to enforce the judgment in Canada since it is the "direct product of an unfair and abusive detention, interrogation and prosecution system."

In 2017, the Canadian government apologized to Khadr and paid him $10.5-million for having violated his rights while he was in Guantanamo Bay. Khadr has also spent more than six years trying to appeal his conviction but a military commission appellate court has so far refused to hear the case.