Blanchet vows to press PM on prof’s use of slur, drawing sharp rebukes from Black MPs 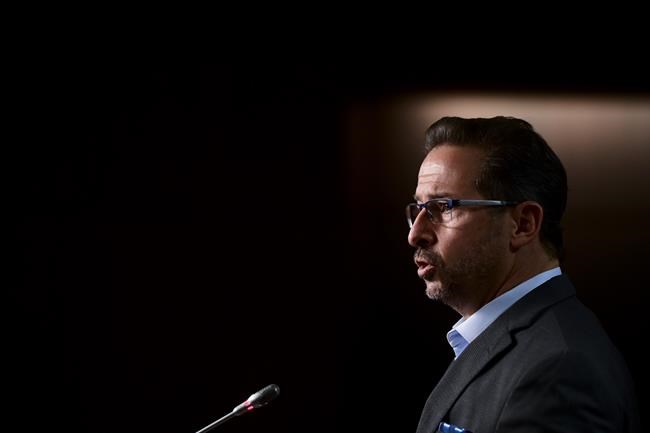 OTTAWA — A controversy over a suspended professor who used a notoriously derogatory word for Black people in class has stirred strong emotions on Parliament Hill, over whether, if ever, the term should be used.

The heated responses came amid a push by the Bloc Québécois to have the government say unequivocally whether the Liberals, and Prime Minister Justin Trudeau in particular, supported the professor at the heart of the controversy.

Bloc Leader Yves-François Blanchet said he was unimpressed with Trudeau's response Wednesday to a question in the House of Commons, and planned to press Trudeau anew on Thursday.

Blanchet said those subjected to hateful words deserve compassion and support, but using the term in an educational context isn't prejudicial.

Asked what he would say to those who believe otherwise, Blanchet said: "I have to say that you have very rightfully expressed your sensibility and opinion, which I respect absolutely, but which I do not share."

The issue has been of particular interest in Quebec, where provincial politicians have come to the defence of University of Ottawa professor Verushka Lieutenant-Duval. So have Bloc Québécois MPs on Parliament Hill.

New Democrat Matthew Green blasted the Bloc, saying that defending use of the offensive word under the banner of free speech opens a path for continued racist attacks on Canada's Black communities.

"For somebody who has had that word hurled against them from the time I was nine years old … that is a dehumanizing word, it is a form of racial violence," said Green, who was wearing a Black Lives Matter button on his mask.

"Those that would choose to defend it, what they're really defending is the prerogative to uphold white supremacy."

Green party Leader Annamie Paul tweeted that she, not Blanchet, has been targeted with use of the slur "and it stung each time."

"Before making statements about an issue he clearly doesn't understand, I invite Mr. Blanchet to contact me so I can explain why the N word remains painful for many," she wrote on Twitter.

Lieutenant-Duval was suspended after using the term during a classroom discussion last month. She has since apologized.

The decision to remove Lieutenant-Duval from the classroom was not taken arbitrarily, nor was her academic freedom threatened at any point, he wrote.

Conservative Leader Erin O'Toole said healthy and open on-campus debate needed to carried out with respect for professors and students. There must be a similar context of respect if ever the offensive word is to be used under the umbrella of academic freedom, he said.

"The discussions about racism lately have been good in raising awareness of inequalities and unacceptable outcomes," O'Toole said Thursday.

"So how do you find that balance? I think universities are trying to look at that and there should be respect as part of that process."

Trudeau wasn't in question period Thursday, but on Wednesday had told the House of Commons that "we all need to be conscious of the power of our words."

“Obviously, our government and I think every member in this House will defend academic freedom,” Freeland said in French.

“At the same time … and this is a difficult thing, we must be aware of the reality and that we have systemic racism in our country and we must also act on that."

This report by The Canadian Press was first published Oct. 22, 2020.