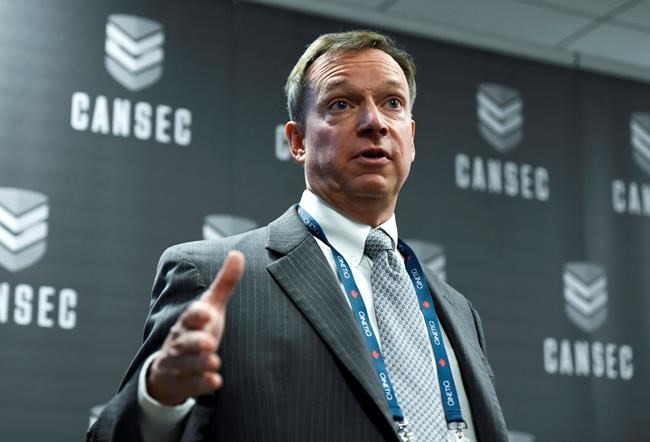 OTTAWA — The company responsible for building Canada's next fleet of warships says it remains on schedule to cut steel in two years — as long as Ottawa gives it more cash to upgrade its Halifax shipyard.

Speaking at a major defence conference on Wednesday, Irving Shipbuilding president Kevin Mooney said his shipyard needs several upgrades that were not originally anticipated when the company was selected to build the new fleet back in 2010.

That is because the warship envisioned today is very different from what was originally planned when Irving agreed to upgrade the shipyard at its own cost as a condition for winning the multibillion-dollar contract, Mooney said.

“Basically it's a larger ship, it's a more complex ship,” he said. “So we have to upgrade portions of the shipyard to be able to handle both the capability and the capacity. And also, we don't want to bring a very high risk to the construction process.”

Irving is now waiting for Ottawa to respond to its latest proposal, Mooney added, but the company needs additional funds by the end of the year in order to stay on schedule and start work on the first vessel by 2024.

“To meet the mid-2024 start of construction date that I mentioned, we need hard funding for equipment and breaking ground and things like that in the shipyard by the end of this year, beginning of next year,” he said.

Mooney did not say how much money Irving is looking for to upgrade its shipyard, and a company official declined to comment.

Public Services and Procurement Canada did not respond to requests for comment on Wednesday.

Irving was tapped in 2010 to build 15 new warships to replace the navy’s 12 frigates and three destroyers, the latter of which have already been retired. The vessels are based on a British design, the Type 26, which is also being built by Australia.

Ottawa originally earmarked $26 billion for the new vessels, with the first of the ships expected in the water by 2025. However, various delays have pushed back that schedule to the early 2030s, with the price tag set at $60 billion.

However, Mooney acknowledged the overall cost of what was already Canada’s largest-ever military procurement is now back under review as a result of skyrocketing inflation and supply-chain issues

That echoes warnings from federal bureaucrats in April that more cost overruns and delays were on the horizon for the delivery of new ships to the navy and coast guard, as "significant challenges" batter Ottawa's multibillion-dollar shipbuilding program.

The threat of another delay is sure to worry the Royal Canadian Navy, whose previous commander told The Canadian Press in December that Canada’s Halifax-class frigates are starting to show their age.

The frigates, which entered service in the early to mid-1990s and act as the navy’s workhorses, have been struck by more than 10 fires since 2018, as well as at least one power outage.

The Canadian Press also reported on an internal Defence Department review in 2020 that found the navy’s maintenance facilities were having an increasingly tough time fixing the warships because of staff shortages, lack of spare parts and the age of the fleet.

This report by The Canadian Press was first published June 1, 2022.