By Zeke Miller And Aamer Madhani, The Associated Press — The Canadian Press — Dec 4 2019 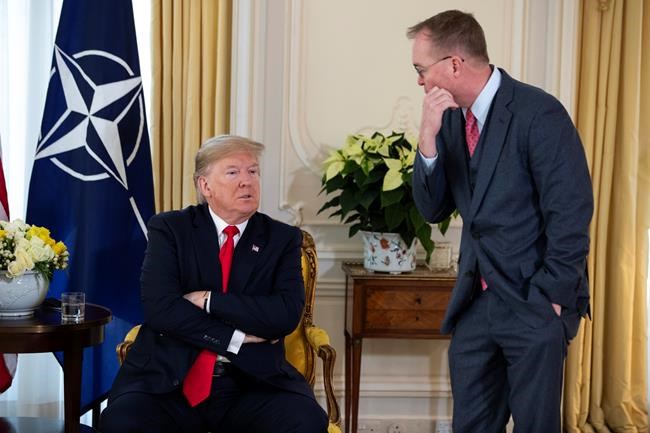 WATFORD, England — Aiming to play the role of global statesman as the impeachment drama was unfolding in Washington, President Donald Trump instead shattered NATO’s professed message of unity at its 70th anniversary celebration in England and put his personal and policy differences with alliance members on stark display.

Trump called Canadian Prime Minister Justin Trudeau “two-faced” and French President Emanuel Macron “nasty” during a 52-hour trip that exposed the alliance’s divisions on military budgets and relations with Turkey, as well as the U.S. leader’s own unconventional ways on the world stage.

At the same time, he found it difficult to leave behind events in Washington, lashing out as House Democrats resumed their push for impeachment over Trump's call for Ukraine to investigate a political rival. He said it was “sad” that Democrats were pushing ahead with the inquiry when “there was no crime whatsoever and they know it.”

Trump, looking to showcase foreign policy wins as he heads into an election year, offered a more optimistic outlook for NATO's future. He took credit for boosting the share of NATO nations that are meeting the alliance’s goal of spending 2% of gross domestic on and sought to pressure more countries to increase their military budgets. But he also put a spotlight on his administration's lingering to-do list: ending a China trade war he instigated, passing the U.S.-Mexico-Canada agreement as well as trade deals with the European Union and Britain.

A day after Trudeau was overheard gossiping about Trump during a reception at Buckingham Palace, Trump called the Canadian leader “two-faced.” In an unguarded conversation, Trudeau told leaders, including Macron and British Prime Minister Boris Johnson, that “he takes a 40-minute press conference off the top," an apparent reference to Trump's long and unscheduled question-and-answer session with journalists earlier that day. Trudeau also said, seemingly about his meeting with Trump, “You just watched his team's jaws drop to the floor.”

Trump fired back during a Wednesday afternoon meeting with German Chancellor Angela Merkel. He suggested that the Canadian's overheard comments were precipitated by Trump's decision to highlight the fact that Canada falls short of NATO goals on spending.

“The truth is that I called him out on the fact that he's not paying 2% and I guess he's not very happy about it,” Trump said. Later, seeming to relish the spat, Trump remarked, “That was funny when I said that guy was two-faced.”

Relations between Trump and Macron, once the American president's closest European ally, deteriorated a day earlier in feisty exchanges on live television.

First, Trump slammed what he called “very, very nasty” comments by Macron, who had lamented NATO’s “brain death" under Trump's leadership of the U.S. Then, in a later meeting on the sidelines of the summit, Macron rebuked Trump over his insistence that Europe repatriate its citizens who fought with the Islamic State group, as well as his unilateral decision to withdraw American troops from northeast Syria.

Trump's shift on Syria had cleared the way for a Turkish assault on Kurdish fighters who had been allied with the west in the fight against IS militants. There was more disagreement between Trump and European leaders over Turkey. Macron, in particular, wanted the alliance to do more to confront Turkish President Recep Tayyip Erdogan over his incursion into Syria and his purchase of Russian surface-to-air missiles.

On Wednesday, Trump falsely claimed that Macron had taken back his comments about NATO’s “brain death,” even though the French leader said he stood by them.

It was far from the only inconsistency highlighted during two days of summitry.

Trump, who has celebrated every new stock market high, claimed that he didn’t pay too much heed to the market after stocks tumbled following his remarks that a China trade deal may not come until after Election Day. He also claimed it was his decision not to more quickly reach an agreement with China, as relations have soured over U.S. support for pro-Democracy protests in Hong Kong. Previously, Trump had said it was China that would rather wait for the election results.

Trump also declared NATO to be the healthiest it’s ever been even as the alliance is grappling with fundamental questions about its funding and whether its requirement for mutual still makes sense as it confronts threats that now extend beyond Russia to a rising China and international terrorism.

Trump has resisted some European efforts to put more pressure on Erdogan, whom he met with on the sidelines of the summit. The president praised the Turkish leader despite widespread calls in Washington and Europe for the Turkish government to suffer consequences for its actions in Syria and decision to buy the Russian air system.

The president abruptly a news conference that would have played out at the same time as the impeachment hearing in Washington. But he insisted he's unconcerned about the inquiry, with Democrats facing a mountainous climb to remove Trump from office. While Democrats hold the majority in the House, Republicans control the Senate and not one GOP lawmaker in the upper chamber has support for ousting Trump. An impeachment conviction in the Senate would require 67 votes out of 100.

Still, Trump lashed out at Democratic lawmakers for scheduling the hearing while he was overseas and predicted low ratings for testimony from experts.

“These people, you almost question whether or not they love our country,” Trump said of the Democrats.

Democrats argue that Trump acted improperly when he pressed Ukraine President Volodymyr Zelenskiy to open an investigation of former Joe Biden and his son’s dealings in the eastern European nation. Hunter Biden sat on the board of a Ukrainian energy company.

During his meeting with Merkel, Trump told reporters he didn’t know why his personal attorney Rudy Giuliani was speaking with the White House Office of Management and Budget — a revelation that was included in phone records published in the House Intelligence Committee’s impeachment report.

“I really don’t know,” he said. Trump encouraged reporters to ask Giuliani about the calls, but insisted they are “no big deal.”

Trump has frequently criticized NATO members for falling well short in doing their financial part through the first three years of his presidency, and he was eager to take credit for recent increases in spending by alliance members.

After a NATO summit last year, he called for members to devote at least 4% of GDP to military spending and took particular aim at Merkel, whom he accused of paying Russia ‘"billions of dollars for gas and energy” while failing to meet her nation's commitment on spending.

At this year's summit, he told reporters, “I don't think, frankly, before us, that NATO was changing at all, and NATO is really changing right now.''

But while NATO leaders emphasized unity, Trump convened his own sub-group of the alliance — limited to only those who had met the spending target.

“We call them affectionately those two -ers,” he said of the nine nations assembled out of the soon-to-be 30-member alliance. “So this is a lunch that's on me.”

Do not enter text beyond this line.