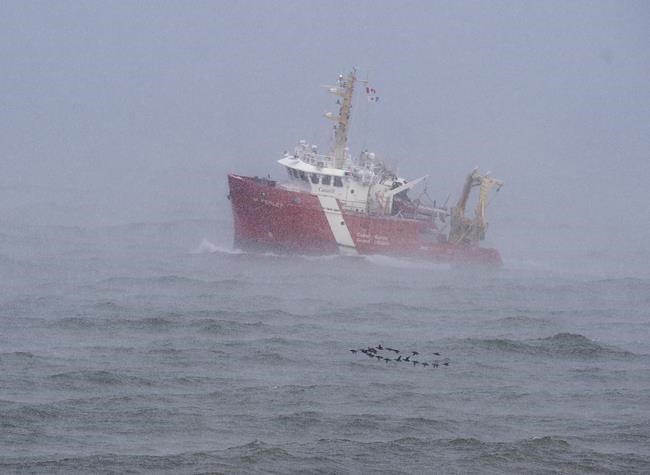 OTTAWA — The federal government has quietly revealed that it plans to pay nearly $1 billion to build a new ocean research vessel for the Canadian Coast Guard whose original cost was supposed to be one-tenth that amount.

The new cost estimate for the offshore oceanographic science vessel represents the latest blow to Ottawa’s multibillion-dollar plan to build new ships for the Royal Canadian Navy and Coast Guard, first revealed more than a decade ago and beset by problems ever since.

It also sets the stage for what is likely to be a difficult week for the government as Parliament’s budget watchdog and the federal auditor general prepare to release separate, highly-anticipated reports on the plan's actual costs and problems.

The federal procurement department revealed the new $966-million price tag for the science vessel on Friday, quietly posting the new cost online on the same day it officially awarded Vancouver-based Seaspan Shipyards a contract to build the ship.

That represents a nearly tenfold increase over the original plan to spend $108 million to replace the Coast Guard’s oldest and largest research ship, the CCGS Hudson, when the project was launched in 2008.

It is also three times the government’s most recent estimate in 2016, when Ottawa predicted the vessel would cost $331 million. Coast Guard spokesman Barre Campbell said officials knew at that time that the agency would need more money.

“As the project has progressed and moved closer to construction, the estimated project cost has been updated to reflect the value of negotiated contracts and actual costs incurred, and has been reviewed independently by expert third parties,” Campbell said in an email.

In addition to cost overruns, the project has been plagued by delays. The vessel was supposed to have been delivered by 2017-18, but design and technical problems have pushed that date back until at least 2024.

In the meantime, Ottawa has been forced to sink more money into the Hudson to ensure the Coast Guard has an ocean research ship.

A spokeswoman for Seaspan, which recently finished building three fisheries science vessels for the Coast Guard and is now working on the first of two new support ships for the Navy, referred questions about the ocean science vessel’s skyrocketing costs to the government.

News of the ballooning cost comes ahead of the release of two watchdog reports slated for later this week, setting the stage for pointed questions to the government about the long-term costs and feasibility of the entire shipbuilding plan.

Parliamentary budget officer Yves Giroux will release the first report on Wednesday, which will focus on the single-largest federal procurement in Canadian history: the construction of 15 new naval warships based on the British-designed Type-26 frigate.

Those warships will replace Canada’s 12 Halifax-class frigates and three already-retired destroyers and serve as the Navy’s backbone for the majority of the coming century.

The federal government pegged the total cost of building the vessels in Halifax at upwards of $60 billion back in 2017, which was more than double the $26 billion first budgeted in 2011. But many analysts expect Giroux’s number to far surpass that estimate.

Giroux will also present the estimated cost and impact on schedule should Canada decide to abandon the Type-26 design and instead build one of two other warships, and what would happen if Canada built a few Type-26s before switching to another design.

Those estimates, which come only weeks after Defence Department officials revealed to The Canadian Press that the first Type-26 vessels won’t be delivered until at least 2030, could increase pressure on the government to scrap its plan and go in a different direction.

Federal auditor general Karen Hogan will then present her own assessment of the entire shipbuilding strategy on Thursday, including whether officials have properly managed the plan since it was launched in earnest in 2011.

One of the expected findings is that many of the ships the plan was supposed to help replace were already at or beyond their expected retirement dates when the strategy was launched with the selection of Seaspan and Irving Shipyards as the main beneficiaries.

This report by The Canadian Press was first published Feb. 21, 2021.

Note to readers: This is a corrected story. A previous version said Seaspan is currently building three fisheries science vessels for the Coast Guard.