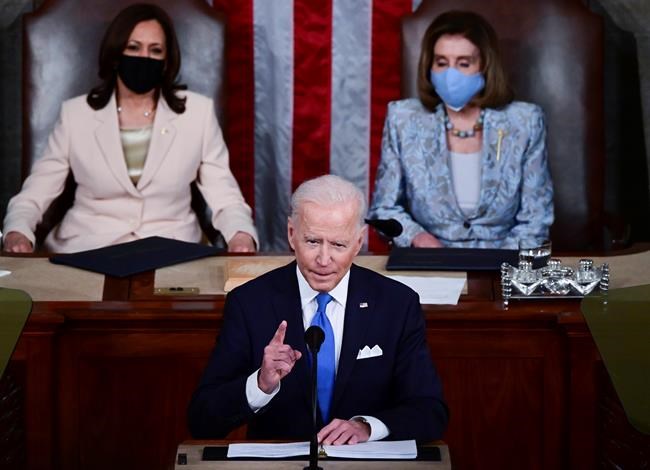 In the same breath, however, the speech marking Biden's first 100 days as commander-in-chief offered a measure of comfort by suggesting Buy American would not offend the terms of trade deals like the U.S.-Mexico-Canada Agreement.

"American tax dollars are going to be used to buy American products, made in America, to create American jobs. That's the way it's supposed to be, and it will be in this administration," Biden declared.

The notion of keeping U.S. government spending on American soil, a philosophy that dates back to 1933, will be the "one principle" guiding the $2.2-trillion infrastructure package dubbed the American Jobs Plan, he added.

"I might note, parenthetically, that does not violate any trade agreement. It's been the law since the '30s," Biden said through sustained applause in the House chamber, where COVID-19 allowed only a relative handful of lawmakers to attend.

"I've made it clear to all my cabinet people: their ability to give exemptions has been strenuously limited. It will be American products."

Much of what Biden said on the subject, including mention of trade agreements and cabinet members, did not appear in the prepared version of his remarks distributed to reporters before the speech.

"Those policies continue to concern us — 'Made in America' failed to embrace the integrated nature that we have in the steel business," said Catherine Cobden, head of the Canadian Steel Producers Association.

"Protectionism between neighbours and allies hurts everyone. We're really hopeful that that's not the way this plays out."

The picture is likely to become more clear by midsummer, when an internal review of the existing rules — including how domestic content is defined and whether information and communication technology should be covered — is due.

"That will be the key to determining impacts on Canada," said Dan Ujczo, senior counsel in the international trade practice at Thompson Hine, based in Columbus, Ohio.

Earlier this week, Biden appointed trade expert and former labour executive Celeste Drake as the director of a new Made in America office, which will clarify and enforce the rules, as well as pass judgment on any exemption requests.

Drake, who played a key role in negotiating the labour provisions that helped get the USMCA through Congress, "knows the loopholes in Buy America policies and waivers better than anyone," Ujczo said.

Maryscott Greenwood, the president and CEO of the Canadian American Business Council, warned Thursday against hitting the panic button, at least in terms of the guardrails that exist for federal infrastructure projects.

Canada has successfully negotiated exemptions in the past, notably in 2009 after then-president Barack Obama imposed his own version of the rules, and more recently under Trump when the Federal Emergency Management Agency was limiting exports of personal protective equipment at the height of the COVID-19 pandemic.

"I do think that Canada will be able to negotiate a carve-in, if you will," Greenwood told an online panel discussion with members of the Calgary Chamber of Commerce.

"Governments, interlocutors, business groups, our group — we're all working really hard on this. But it is not the entire enchilada. There is an awful lot of economic collaboration …  we can do outside the scope of the particular infrastructure bill."

What worries a lot of Canadian suppliers, contractors and employers isn't so much the federal rules, but the vast array of lower-tier restrictions that exist at the state and local level commonly referred to as "Buy America."

That, combined with the strident political rhetoric of the last four years, as well as the last 100 days, threatens a chill that could discourage procurement officers and regional government officials from looking beyond U.S. borders.

"When you're dealing with the U.S., it's a long game," said Canadian Manufacturers & Exporters president Dennis Darby.

The American objective is less about punishing countries like Canada than it is about competing with other countries that play by different rules, such as China, he added — a scenario that's likely much easier to navigate with Biden than it ever was with Trump.

"We're not specifically the target, but we end up being collateral damage, and we have to find a way to make sure we don't get caught," Darby said.

"This is a more normal discussion with the U.S. — our guys are much happier to have these discussions than the much more unpredictable ones they had with the previous administration."

The time for action is now, Mark Agnew, vice-president, policy and international with the Canadian Chamber of Commerce, said last week at hearings before a House of Commons committee exploring Canada-U.S. ties.

— Ensure high-value Canadian services like support contracts don't get lost in the focus on goods;

— Identify areas like clean energy and critical minerals, key in the manufacture of electric car batteries, where Canada can be a real partner to the U.S.;

— Better, more detailed data on the complex and esoteric web of rules, regulations and restrictions that exist at all U.S. levels of government, as well as agreements with the World Trade Organization.

"We are at a critical moment in the relationship," Agnew said. "We need to really drive home the point of why it is in the U.S. self-interest to work with us."

This report by The Canadian Press was first published April 29, 2021.