Trudeau arrives in U.K. to start four-country consult with allies on Ukraine response 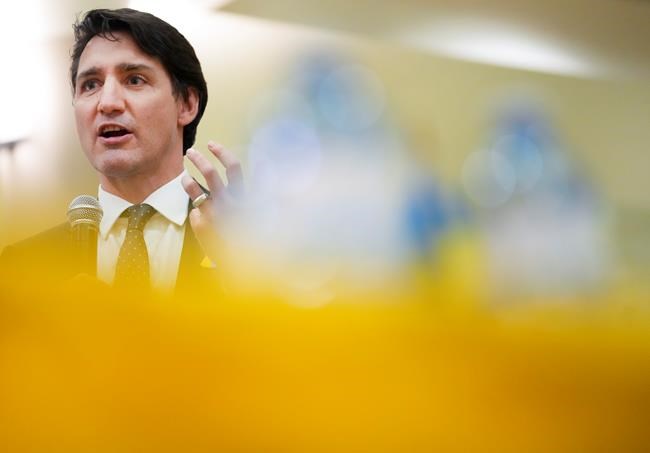 LONDON — As Olivia Milton and her husband packed up their four-year-year son up for trips to their Kyiv neighbourhood bomb shelter, they crafted a narrative to explain the flurry of activity to him.

With the Russian war on Ukraine underway, Milton, 33, said they told him there was a "crazy man" who was "kind of sick" who was coming to take their land with his warplanes and tanks.

"Hey mom, you know, I had a dream today," Milton recalled her son later telling her later. "I was dreaming while I was sleeping, and I had a dream that I have a police tank that's protected the city."

Milton reflected on the war in an interview with The Canadian Press from her family's Kyiv apartment a few days before Prime Minister Justin Trudeau arrived in London Sunday night for the start of a four-country Europe tour. It offered a subtle human snapshot of Ukraine's strife as 1.5 million citizens have fled across Europe in an unprecedented refugee crisis.

Trudeau is planning to meet with several allies to discuss responses to Russia's attack and the humanitarian crisis it has now spawned.

Milton said she and her family were staying put, in part because they were not sure they would actually be able to safely flee Kyiv.

Trudeau arrived in Britain as plans to evacuate civilians from a Ukrainian port city collapsed for the second time.

Residents expected to leave Mariupol during the 10 a.m. to 9 p.m. local ceasefire, Ukrainian military authorities said earlier in the day, but Interior Ministry adviser Anton Gerashchenko later said the planned evacuations were halted because of an ongoing assault by Russian troops.

It is not possible to know the exact number of people killed so far since the Feb. 24 invasion. The United Nations human rights office said 364 civilians have been confirmed killed, but the true number is likely much higher. Russian and Ukrainian officials have not provided information on military causalities.

The British defence ministry said Sunday in an intelligence update that Russia's tactics in Ukraine were comparable to their previous pummelling of cities in Chechnya in 1999 and Syria in 2016 with airstrikes and artillery, after Russian forces faced unexpected resistance. The intelligence report said the strength of Ukrainian fighters continues to surprise the Russians, and that the bombing of cities, including Kharkiv, Chernihiv and Mariupol represented an effort to break Ukrainian morale.

In a one-hour conversation on Sunday, Turkish President Recep Tayyip Erdogan urged Russian President Vladimir Putin to cease the fighting in an attempt to address humanitarian concerns and try to find a political solution.

The Kremlin said Putin replied that Russia's military action in Ukraine could be halted "only if Kyiv ceases hostilities and fulfills the well-known demands of Russia."

With a third round of negotiations between Ukraine and Russia set for Monday, the Kremlin said Putin said he hoped Ukraine would fully consider "emerging realities."

On Monday, Trudeau will compare notes with British Prime Minister Boris Johnson in London, where they will be joined by their Dutch counterpart, Mark Rutte.

In the following days, Trudeau is to meet with other leaders in Riga, Latvia, Berlin and Warsaw, Poland.

He is to meet NATO Secretary-General Jens Stoltenberg and visit the Latvian military base where hundreds of Canadian Forces are contributing to Canada's leadership in that country of NATO's long-standing deterrence mission to bolster its eastern European flank against Russia.

Canadian Foreign Affairs Minister Melanie Joly has been in Europe over the past few days in meetings with NATO and European Commission officials about ongoing efforts to sanction Russia. International Development Minister Harjit Sajjan will also travel to Geneva and then join Trudeau in eastern Europe to meet with the United Nations and others for talks on Ukraine.

Ukrainian President Volodymyr Zelenskyy renewed his plea on Sunday for a no-fly zone over his country, saying in a video address that "the world is strong enough to close our skies."

Canada and its NATO allies have ruled out a no-fly zone, saying it would essentially lead to an all-out air war between NATO forces and Russia. Putin has made clear he'd consider such a move a hostile act.

Instead, the alliance of western nations has opted to send weapons and defensive equipment to Ukraine while attacking Russia's economy with a series of unprecedented moves to isolate it.

Before departing Canada on Friday, Trudeau said he wanted to join partners in finding ways to counter disinformation and misinformation that he said was a "particularly strong facet of this conflict, this war in Ukraine."

In Kyiv, Milton said she and her husband were working in what she called an "information army" as part of Ukraine's resistance.

She said the group is comprised of hundreds of technology workers, public relations, marketing and advertising specialists who have been sending information to Western media, bombarding social media platforms and trying to penetrate into Russia itself to show its population that its young soldiers are needlessly dying.

This includes photos, videos, digital information and other testimonials to back what they are seeing and hearing.

Milton and her husband have told their son that his parents have "joined forces with this information army informing the world" to explain to him why he must go back and forth between a bomb shelter and can no longer play outside with other children.

Her young son, she said, seems to be accepting of the situation, as he told her of his dream of owning a very large tank.

This report by The Canadian Press was first published March 6, 2022.

– with files from the Associated Press.