‘We are all hyped:’ Toronto’s Cameroonian community cheers on Raptors’ Siakam 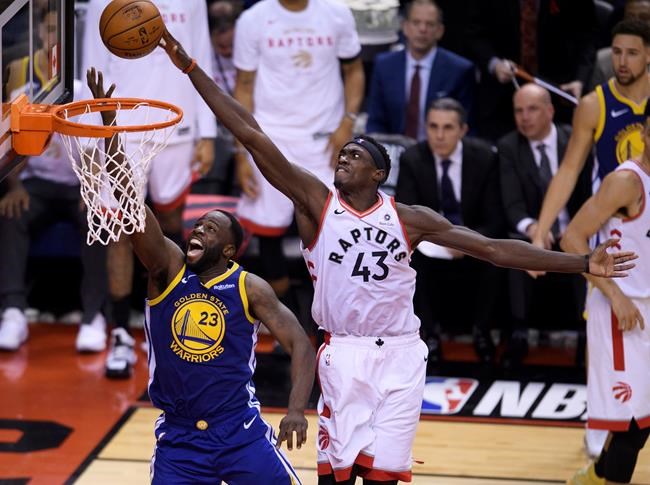 TORONTO — There was little fanfare when the Toronto Raptors chose skinny, unheralded forward Pascal Siakam in the 2016 NBA draft, but Gervais Tchinda says the city's Cameroonian community was excited to see one of their countrymen join the team.

Now, as Siakam has emerged as a driving force on the Raptors' first-ever run to the NBA Finals, Tchinda says members of the diaspora are "so happy" to watch the 25-year-old player and the team succeed.

"We are all hyped, all excited about the team. Almost all Cameroonians in town are watching basketball," Tchinda said Friday, after Siakam led the Raptors to a 118-109 victory over the Golden State Warriors in Game 1 of the Finals the night before.

Tchinda, who co-founded the Association of Cameroonian Youths in Toronto three years ago, said he watched the game at his home with several other young fans from Cameroon.

"I was astonished to see Pascal stepping up and being the man to score and lead us to victory," he said, noting Siakam landed a team-high 32 points in the game.

The 29-year-old Tchinda was born in Douala, Cameroon's largest city and its economic capital. It's also Siakam's birthplace, although the basketball player spent most of his childhood in a Catholic boarding school eight hours away from his family home.

Tchinda said he moved to Toronto six years ago to study accounting. At first he struggled with the Canadian winters and the language barrier — like most Cameroonians, including Siakam, Tchinda's first language is French — but he said he's come to feel at home in the city.

Along with a few friends, he founded the Cameroonian youth group with the hope it would act as a "platform" to make other young Cameroonians feel at home.

The founding of association in 2016 coincided with Siakam's entry into the NBA, and Tchinda said he and the group's other members have been watching their countryman with pride from the beginning — despite his less-than-spectacular rookie season.

"The first year was the year to learn the job, right? He wasn't that great in 2016 or 2017," Tchinda said. "But since last year we have been witnessing an evolution. He has really improved his game, and this year he's like, 'Whoa, we do not even recognize the guy.'"

It's not just Raptors fans who have taken note of Siakam's progression — he's among three finalists for the NBA's Most Improved Player award, along with D'Angelo Russell of the Brooklyn Nets and De'Aron Fox of the Sacramento Kings.

Tchinda said his youth group has been trying to arrange a formal meeting with Siakam, but so far the NBA star's busy schedule has prevented it from happening. Tchinda noted, however, that he and some friends ran into Siakam outside the team's arena after a game this winter.

For his part, Siakam said he didn't know much about the Cameroonian community in Toronto but was grateful for his fans.

"I have a lot of support from my fellow Cameroonians and just Africa in general," he told reporters on Friday. "It feels great because you always know that Canada and especially in Toronto, the diversity is incredible. You have people from different countries and all together just cheering for one team. Obviously, having that support is amazing."

Siakam and the Raptors will look to keep their momentum going when they host the Warriors for Game 2 of the Finals on Sunday night.

"I don't know if Pascal can hear this, but all Cameroonians are behind this team," he said. "Go Raptors!"