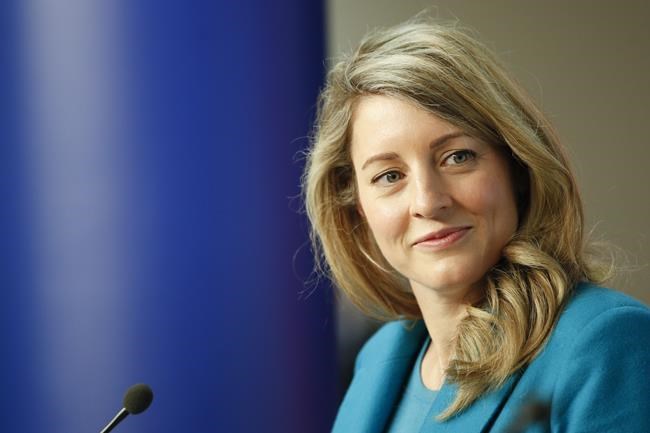 OTTAWA — Canada's foreign affairs minister says she plans to travel to Asia and elsewhere for some first-hand research before she releases the government's much-anticipated new policy on China.

Foreign Affairs Minister Mélanie Joly also says she wants to strengthen a Canada-led international convention that condemns arbitrary detention – or hostage diplomacy – so that it has more teeth.

Joly told The Canadian Press that although the simmering crisis in eastern Europe with Russian troops massed on Ukrainian borders is all-consuming, she is actively working to deliver on a key marching order given her by Prime Minister Justin Trudeau: to create a comprehensive new Indo-Pacific strategy.

"I'll be going into the Indo-Pacific region soon. So that also will be part of the engagement before tabling the Indo-Pacific strategy," Joly said in an interview this week before wrapping up a visit to Germany and France.

"The geopolitical situation in Europe is taking a lot of my time but I'm very much aware that the Indo-Pacific strategy will be a key mark of our government."

The Indo-Pacific label is foreign-policy shorthand for policies and approaches to the vast Asia-Pacific region that deal with confronting China. Joly is attending a major international security conference in Munich where the Ukraine-Russia crisis is a major discussion topic. But she will take part in China-focused talks in Paris at a European Union forum on Indo-Pacific issues.

"It's organized by the French so that's also part of understanding what other like-minded countries are doing," she said.

With the United States leading the way on recalibrating the West's relations with China, Joly's efforts are an element of Canada's efforts to redefine relations with the People's Republic after they plunged to an all-time low following last year's resolution of the Meng Wanzhou-two Michaels affair.

When the RCMP arrested Meng in December 2018 on a U.S. extradition warrant, China detained two Canadian men, Michael Kovrig and Michael Spavor, in what was viewed by Canada, the U.S. and dozens of other allies as retaliation. They were held in prison for almost three years before the U.S. dropped its extradition case against Meng, ending the saga for all.

One year ago, the standoff with China led to Canada creating a new international convention condemning arbitrary detention in diplomatic affairs that has now garnered the support of 68 countries. It was formed as part of an effort to build a broad international coalition to help win the freedom of Kovrig and Spavor.

China, as well as many other critics, have dismissed the declaration as lacking any real coercive power. Joly said she sees merit in what many observers suggest: that the convention needs a provision for sanctions or some other punitive measure against states that use what Joly and others now refer to as "hostage diplomacy."

She said she has been speaking with G7 partners on how to strengthen the convention.

"We will want to give it more teeth and at the same time to bring other countries to the table," said Joly.

"Because although the two Michaels are back, we absolutely need to show, we need to prevent any form of use of arbitrary detentions in relationships between states … It was a novel tool at the time. But I think it has matured well," said Joly.

"We need to embolden it even more."

Some of Canada's G7 partners have publicly declared their support for strengthening the convention.

This past week, on its first anniversary, U.S. Secretary of State Antony Blinken threw his support behind the convention.

"The United States continues to call on the international community to collectively respond and press for the release of all those who are arbitrarily detained around the world. We commend Canada for its leadership in the fight against the practice of imprisoning individuals for diplomatic leverage," Blinken said in a statement.

"We urge others to support this initiative grounded in the rule of law and respect for human rights."

This report by The Canadian Press was first published Feb. 19, 2022.