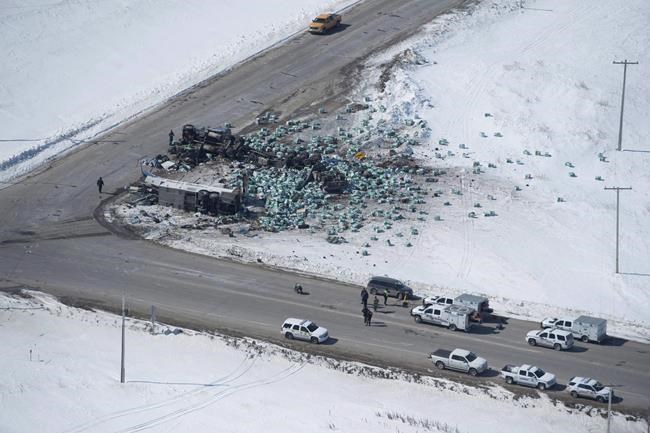 The president of the Humboldt Broncos says a committee is ready to discuss a permanent memorial site for those who died when the junior hockey team's bus crashed in April.

Jamie Brockman says those discussions can begin now that a safety review is complete of the rural intersection where the crash happened.

Sixteen people died and 13 others were injured when the Broncos's team bus collided with a semi trailer at an intersection north of Tisdale.

The consulting firm doing the review suggested the current memorial — some handmade crosses and a large collection of mementoes left by people who have visited the site — be moved to a safer location because of the high volume of visitors.

The committee is made up of family members, team board representatives and people in the community.

Brockman says it will work closely with the Ministry of Highways to find a safe solution.

There's no timeline for when a permanent memorial will be built.

"It's taken a bit to form but I think they're about ready to start regular meetings and discussing these types of things," Brockman said Wednesday.

Constructing a new roadside memorial and access road was one of 13 recommendations included in the report done for the Saskatchewan government and released Wednesday.

"It is expected that the memorial will continue to draw visitors for decades to come," the report said, noting speed limits have been lowered to 60 km/h around the current site because of the number of people stopping.

"Ideally the memorial should be set back far enough from the highways to protect pedestrians and access should be provided via an access road that meets minimum setback requirements."

Chris Joseph, a former NHLer whose son Jaxon died in the crash, said preliminary discussions suggest the government is willing to create a space where people can safely pull off.

He said he wants a roadside memorial, but doesn't want it to be a distraction.